Planning Advisory: March On for Washington and Voting Rights

WASHINGTON, DC — On Saturday, August 28th, the 58th anniversary of the historic March On Washington, March On for Washington and Voting Rights will demand that the vision of Martin Luther King Jr.’s “I Have a Dream” speech be deferred no longer. Below are details and logistics for members of the media covering the March in Washington, D.C.

WHAT: March On For Washington And Voting Rights

WHERE: Marching from McPherson Square to the National Mall in Washington D.C. 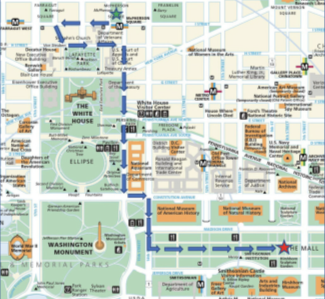 RISER AND MULT BOX ACCESS: Given social distancing best practices, riser space and mult box access will be extremely limited and approved in advance. If we’re unable to accommodate your request, we’ll be livestreaming the March on MarchOnForVotingRights.org, and sharing footage and photos for use after. Credentialed media are also invited to roam to capture footage and interviews.

PARKING: There is no reserved parking. Street parking is available around McPherson Square and on Madison Dr. on the Mall.

COVID POLICY: Please find our full COVID policy here. At the entrances to the National Mall and McPherson Square grounds, we will have free facemasks, gloves, and hand sanitizer for participants. We encourage march participants to maintain social distancing throughout the march as much as possible and wear masks.

For more information on March On For Voting Rights, please contact
media@wearemarchon.org or visit marchonforvotingrights.org.
###
About March On For Voting Rights
March On for Washington and Voting Rights is a mass mobilization to demand that elected officials protect democracy, denounce voter suppression, make D.C. a state, and ensure fair, easy access to the vote. On August 28, the 58th anniversary of the historic March on Washington, we will march on cities across America to demand that the vision of MLK’s “I Have a Dream” speech be deferred no longer. That means passing the For the People Act, the John Lewis Voting Rights Advancement Act, and the Washington, D.C. Admission Act. The march is led by Drum Major Institute, March On, the National Action Network, Future Coalition, SEIU, and 51 for 51, and is joined by over 140 other partners. The march is funded through the #ForJohn campaign, a grassroots effort co-founded by Martin Luther King III and Arndrea King to fight voter suppression.
About March On
March On is a political organization composed of women-led political activist groups that grew out of the women’s marches of January 21, 2017. They have come together as a united force to take concrete, coordinated actions at the federal, state and local levels to impact elections and move the country in a progressive direction. For more information, visit wearemarchon.org.
About the Drum Major Institute
The Drum Major Institute advances the core mission of our founder, Dr. Martin Luther King Jr., to assure that the arc of the moral universe continues to bend toward justice. Dr. King’s legacy and voice are as important today as they were upon our founding 60 years ago. To meet this historic moment, we are lending our unique ability to facilitate dialogue and collaboration to support the countless courageous acts of individuals and organizations across the nation and the world to ensure that the vital conversations that are now starting will sustain and advance far beyond this moment in time—and lead to tangible lasting outcomes. We encourage all people to embrace their role in the King legacy, take action in their community and strive to build the Beloved Community. Learn more at drummajorinst.org.
About SEIU
Service Employees International Union is an organization of 2 million members united by the belief in the dignity and worth of workers and the services they provide, and dedicated to improving the lives of workers and their families and creating a more just and humane society. For more information, visit https://www.seiu.org/.
About National Action Network
National Action Network is one of the leading civil rights organizations in the Nation with chapters throughout the entire United States. Founded in 1991 by Reverend Al Sharpton, NAN works within the spirit and tradition of Dr. Martin Luther King, Jr. to promote a modern civil rights agenda that includes the fight for one standard of justice, decency and equal opportunities for all people regardless of race, religion, ethnicity, citizenship, criminal record, economic status, gender, gender expression, or sexuality. For more information, visit https://nationalactionnetwork.net/
About Future Coalition
Founded by youth activists for youth activists, Future Coalition is a network and community for youth-led organizations and Gen Z and young millennial leaders from across the country that came into being as a project of March On in the fall of 2018. Future Coalition works collaboratively to provide young people with the resources, tools, and support they need to create the change they want to see in their communities and in this country. For more information, visit futurecoalition.org.
About 51 for 51
51 for 51 is a coalition of D.C.-based and national groups committed to equal representation for the over 700,000 D.C. residents who remain locked out of our democracy. The coalition of 20 progressive groups believe American citizens living in the District deserve a voice in Congress and control over their own local laws. Already, President Biden, Vice President Harris, and Senators Warren, Markey, Gillibrand and Hickenlooper have endorsed 51 for 51’s proposed path to statehood.